In the footsteps of Great Silk Road

Arrival in Bishkek, meeting at the airport, transfer to the hotel. Rest. 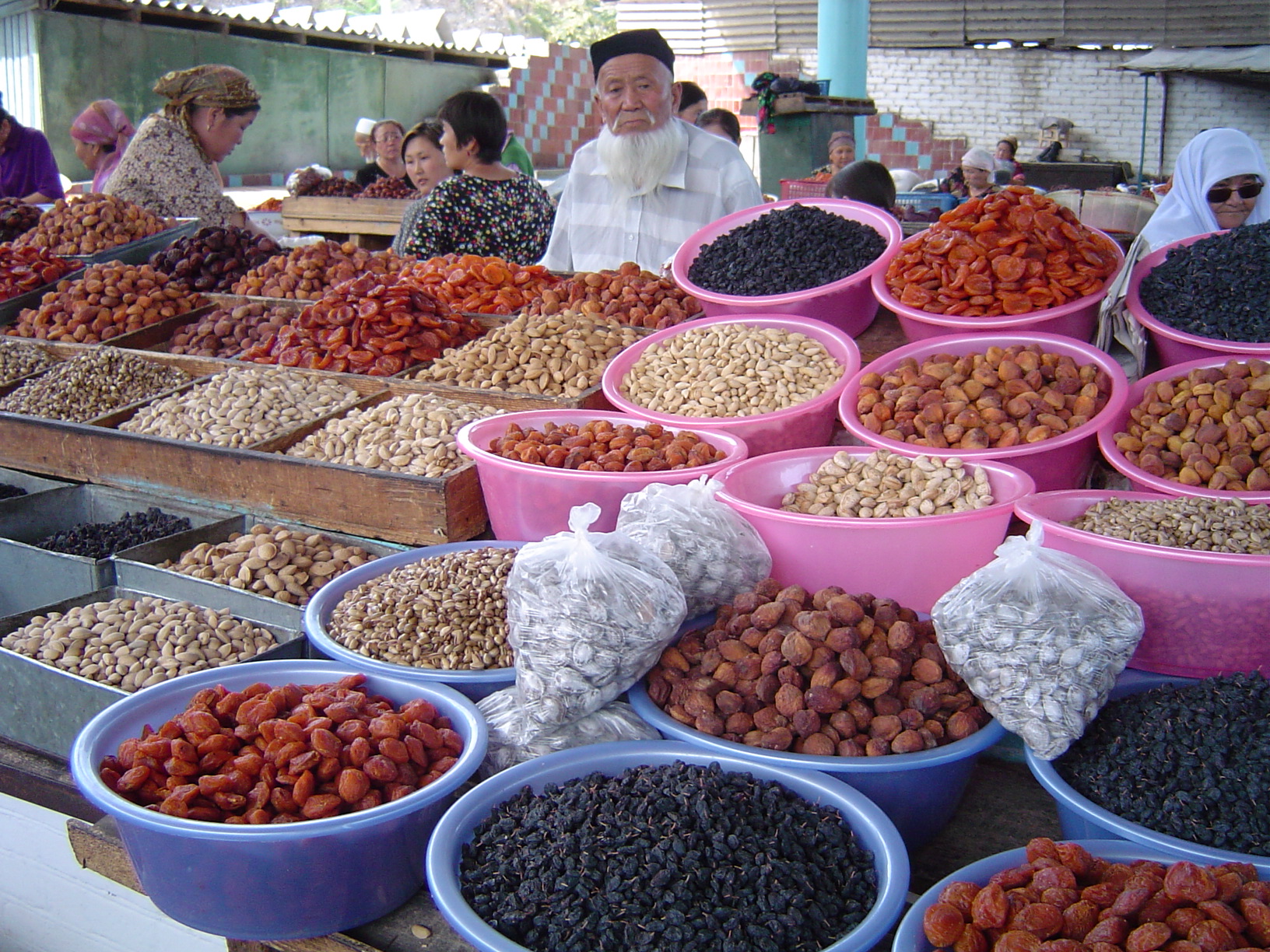 The Ala Archa National Park is an alpine National Park in the Tian Shan mountains of Kyrgyzstan, established in 1976[1] and located approximately 40 km south of the capital city of Bishkek. The park, which includes the gorge of the Ala-Archa River and the mountains surrounding it, is a popular destination point for weekend picnicers, hikers, horse trekkers,skiers as well as mountain climbers looking for challenging ice, rock and mixed routes. The park is open year round, although the most popular season is late summer and early fall. 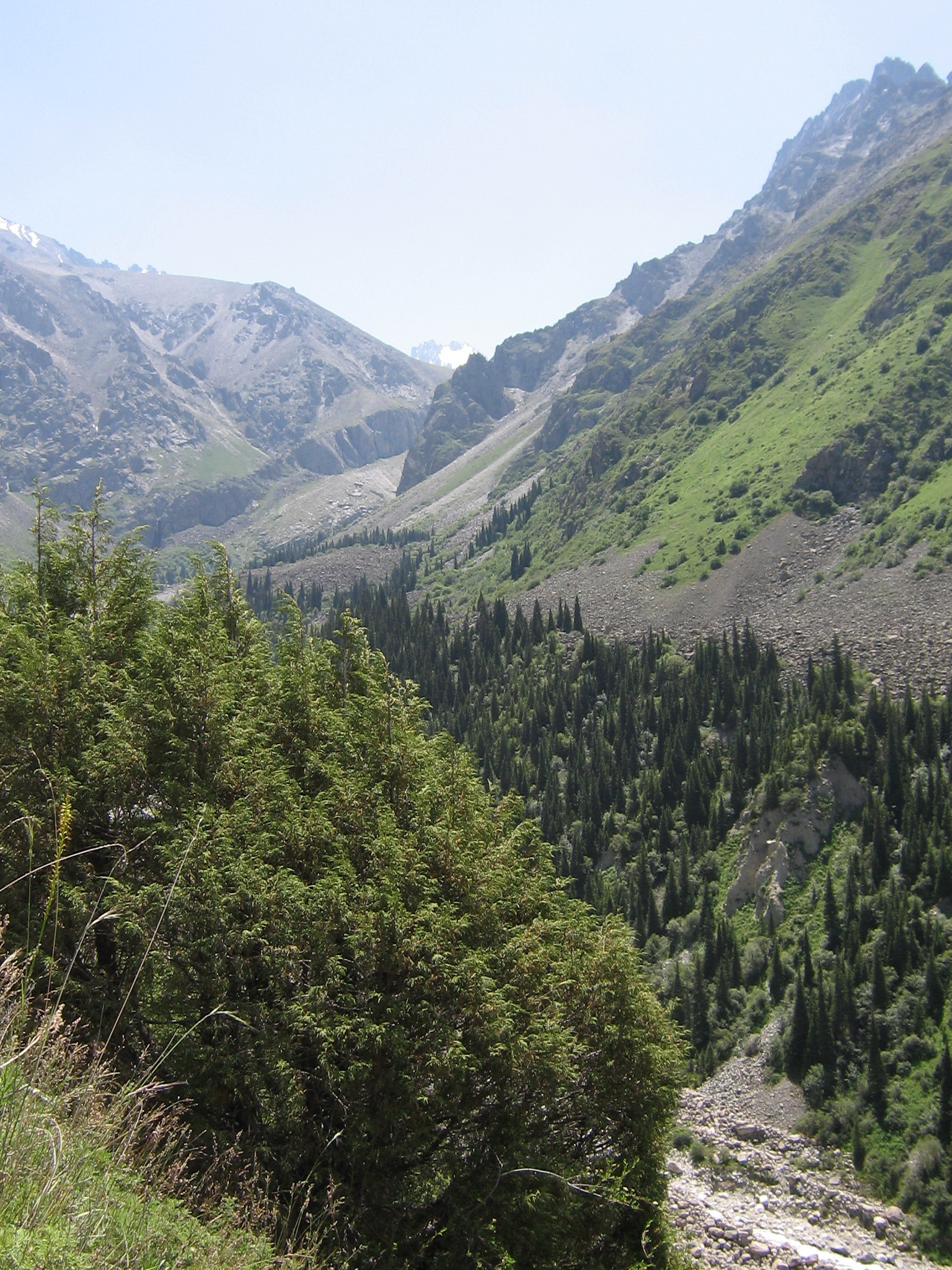 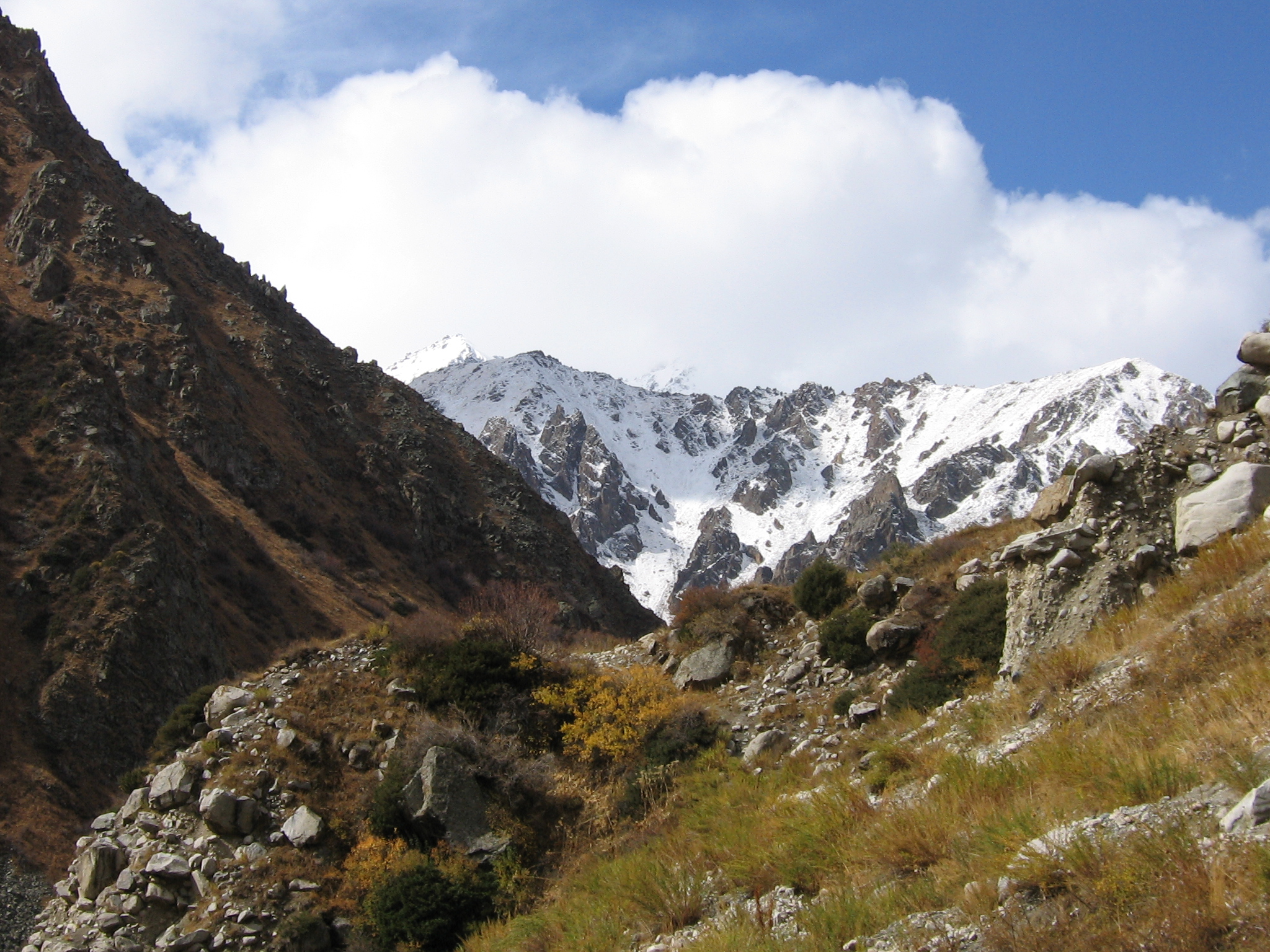 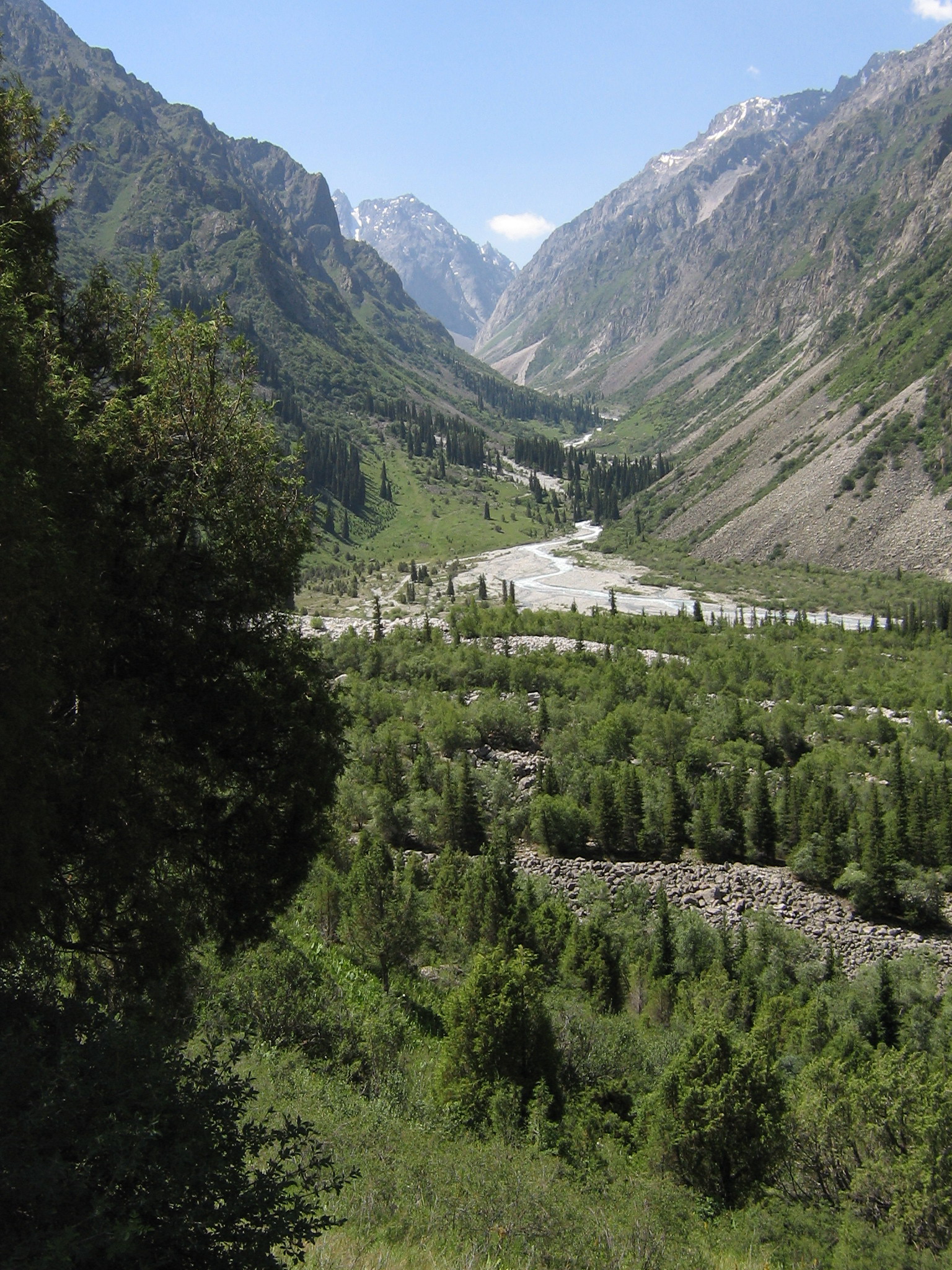 Lunch-picnic in the territory of the park.
Walking to the waterfall or to the Alpinist cemetery.
Back transfer to Bishkek, city-tour, including visiting Osh-bazaar, Central Square, Oak park, Victory Square.
Dinner in a national restaurant.
Accommodation at the hotel.

Transfer to Son-Kul Lake. Accommodation at the yurt camp.
Lunch. Free time for walking around (opportunity to rend horses).
Dinner.

Song Köl (literally "following lake") is an alpine lake in northern Naryn Province, Kyrgyzstan. It lies at an altitude of 3016 m, and has an area of about 270 km2 and volume of 2.64 km3. Lake's maximum length is 29 km, breadth about 18 km, and extreme depth f 13.2 m. It is the second largest lake after Issyk Kul Lake, and the largest fresh water lake in Kyrgyzstan. Its name, meaning "following lake", is popularly considered to refer to this relation. It is surrounded by a broad summer pasture and then mountains. Its beauty is greatly praised, but it is rather inaccessible. The best approach seems to be the 85 km road from Sary-Bulak on the main north-south highway. Other routes require 4x4s. There are no facilities on the lake, but local herders will provide supplies and rent yurts. The area is inhabited and safely accessible only from June to September. 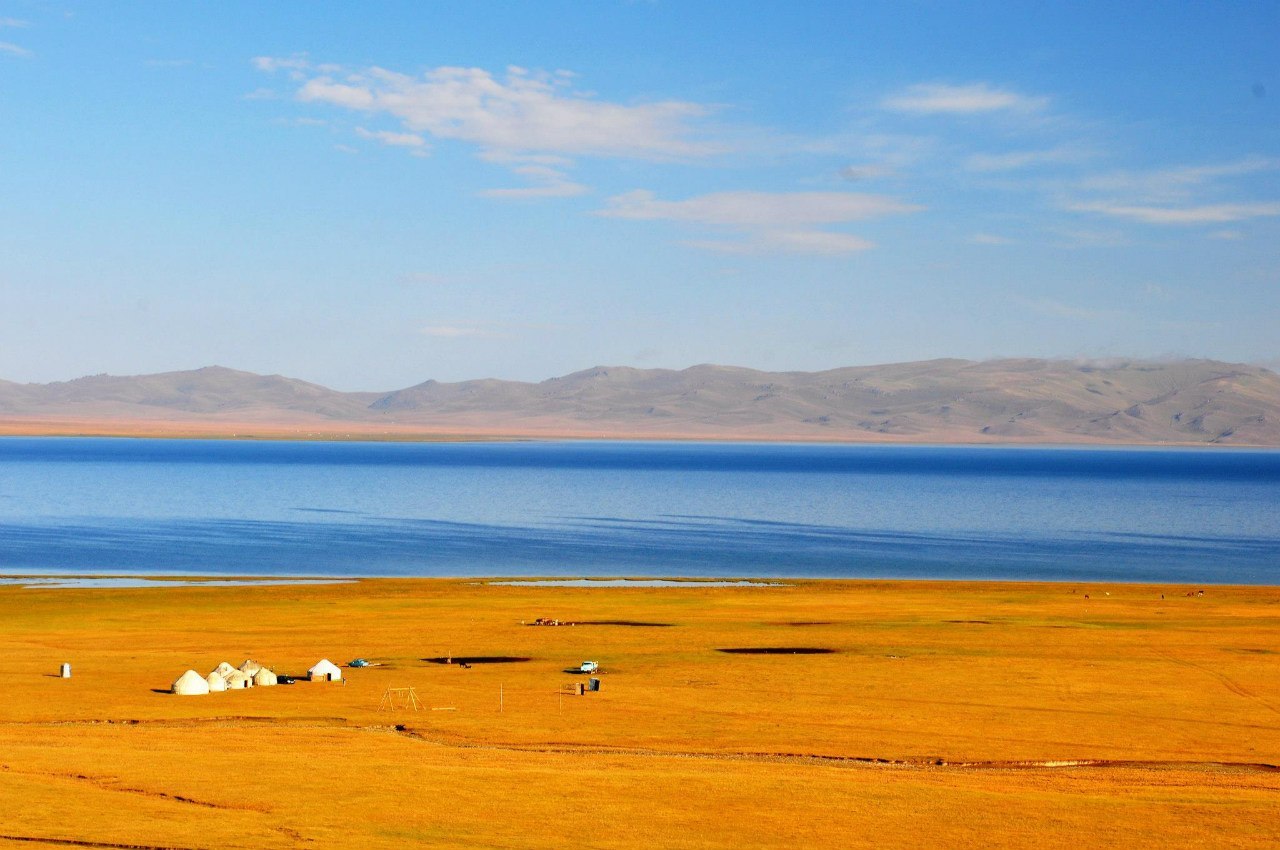 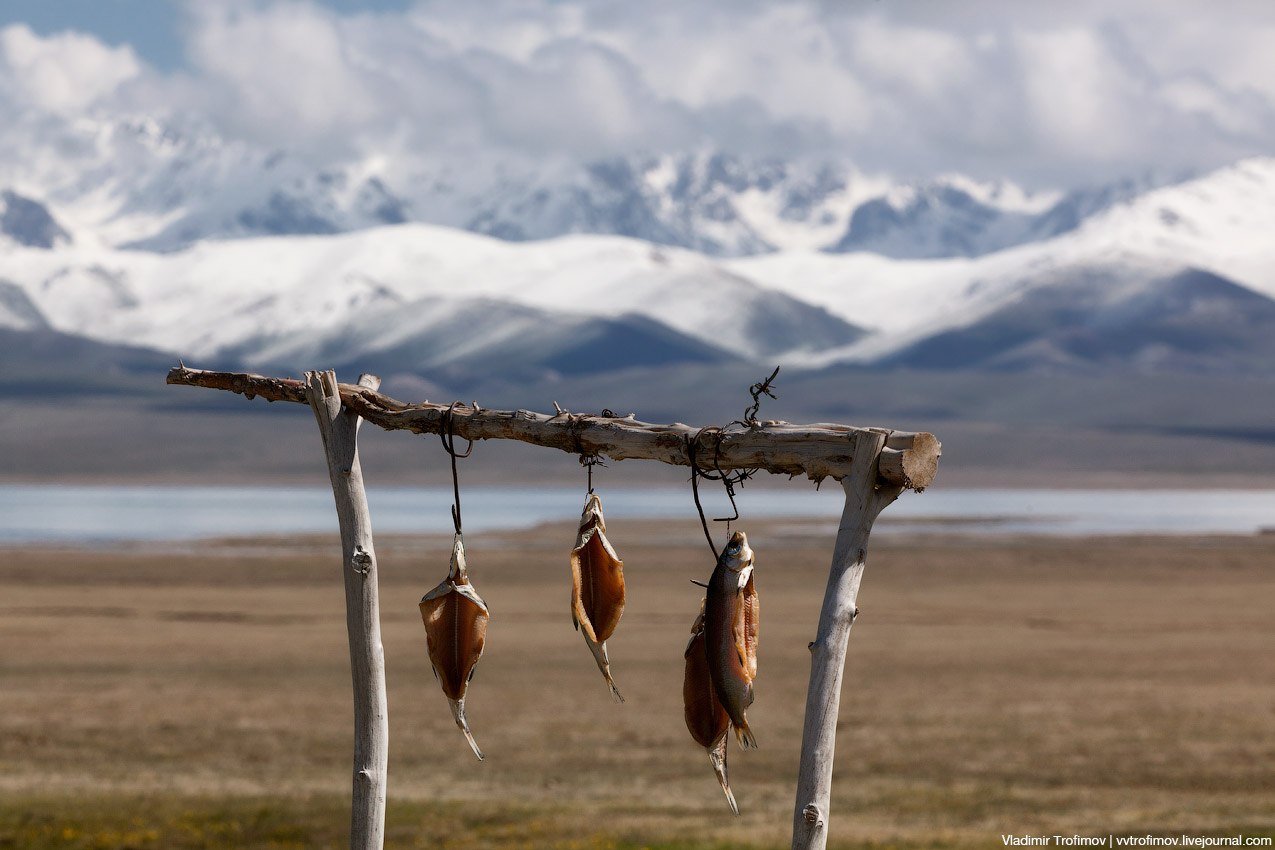 Tash Rabat is a well-preserved 15th century stone caravanserai in At Bashy district, Naryn Province, Kyrgyzstan located at the altitude of 3,200 meters. As early as in 1888, a Russian doctor and traveler Nicolay Lvovich Zeland suggested that it was originally a Nestorian or Buddhist monastery.[1] Researches undertaken in the end of 1970-s and beginning of 1980-s by the Institute of History of the Kyrgyz Academy of Sciences concluded that Tash Rabat was originally built as a Nestorian monastery in the tenth century, although no artifacts sacred to Christians have been found during excavations. Tash Rabat is located somewhat east of the main north-south highway. To the south is Lake Chatyr-Kul and Torugart Pass. To the north is Koshoy Korgon, a ruined fortress of uncertain date. The area is a center for hiking and horse-trekking. You can stay at the yurtcamp of the caretaker. The structure consists of 31 rooms including cavities in the central hall. The rooms are dome-shaped; transition from a quadrangular frame to a dome is by a squinch. Tash Rabat is completely laid by crushed stone on clay mortar with sealing joints by gypsum mortar. 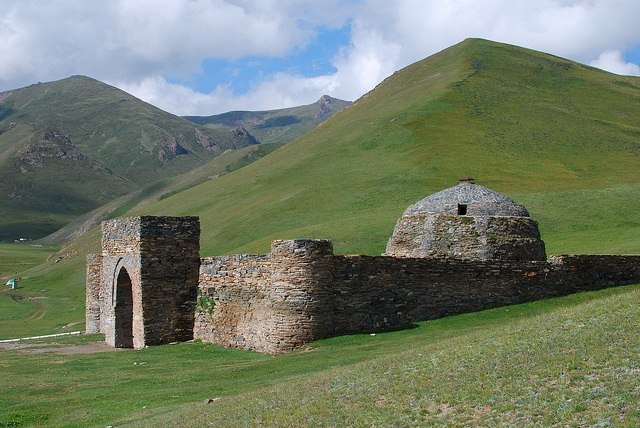 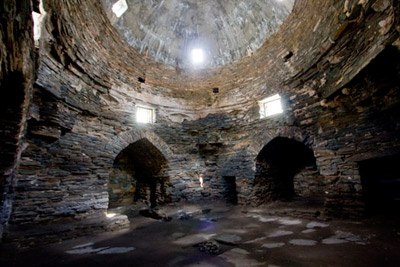 After breakfast transfer to Kochkorka Village. Lunch en the route.
Accommodation at the home-stay. Dinner. 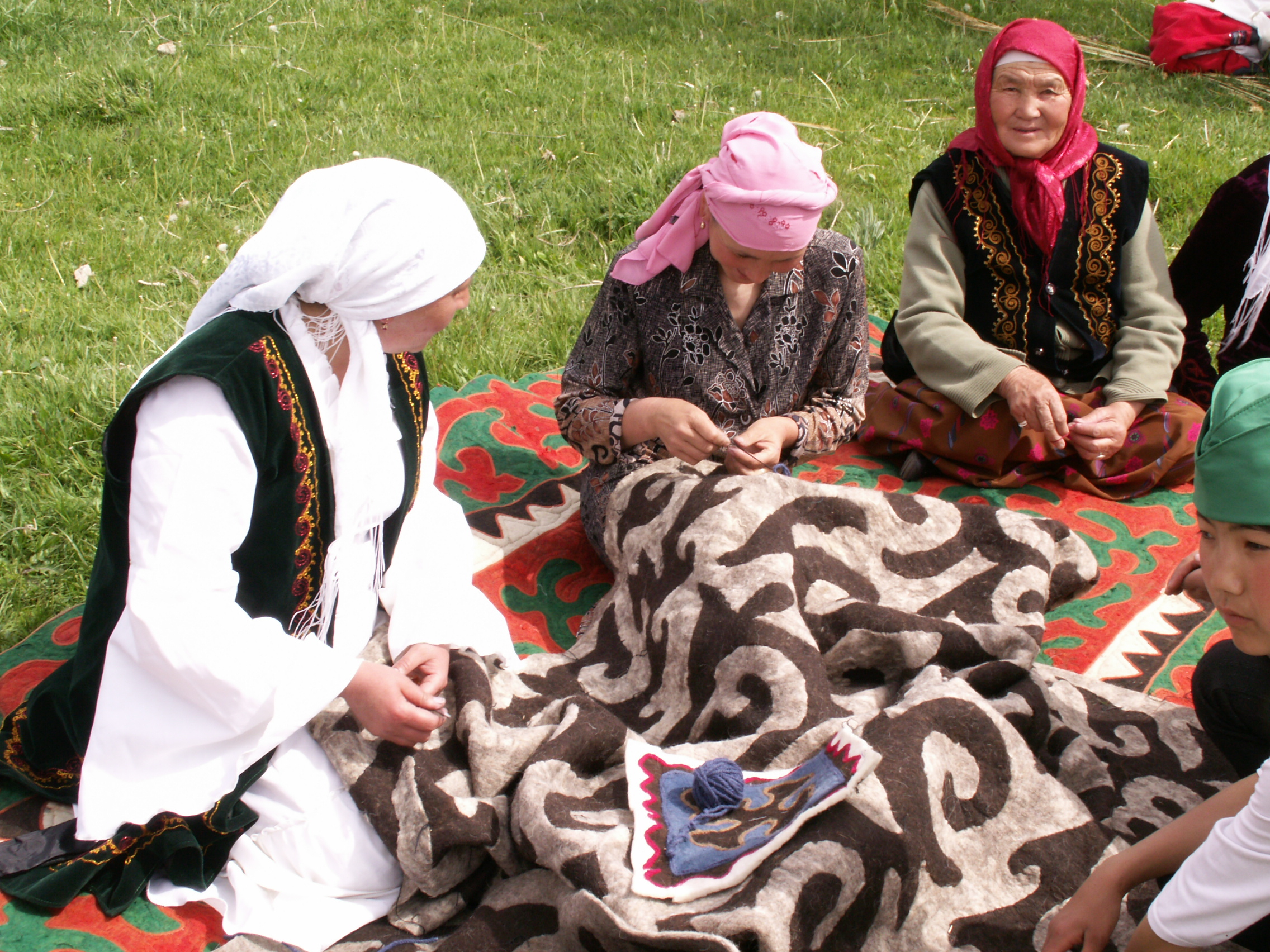 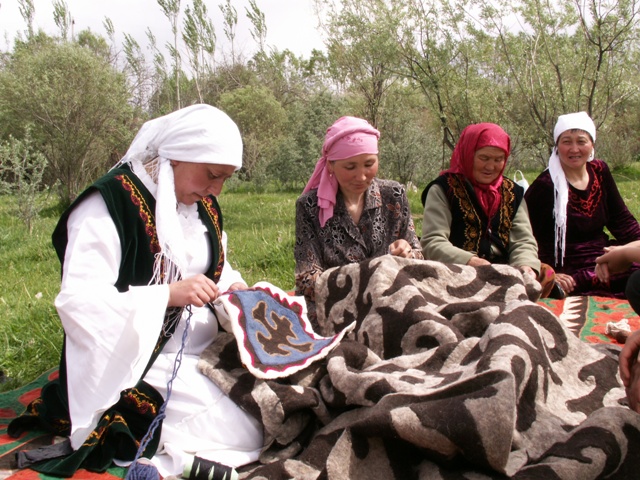 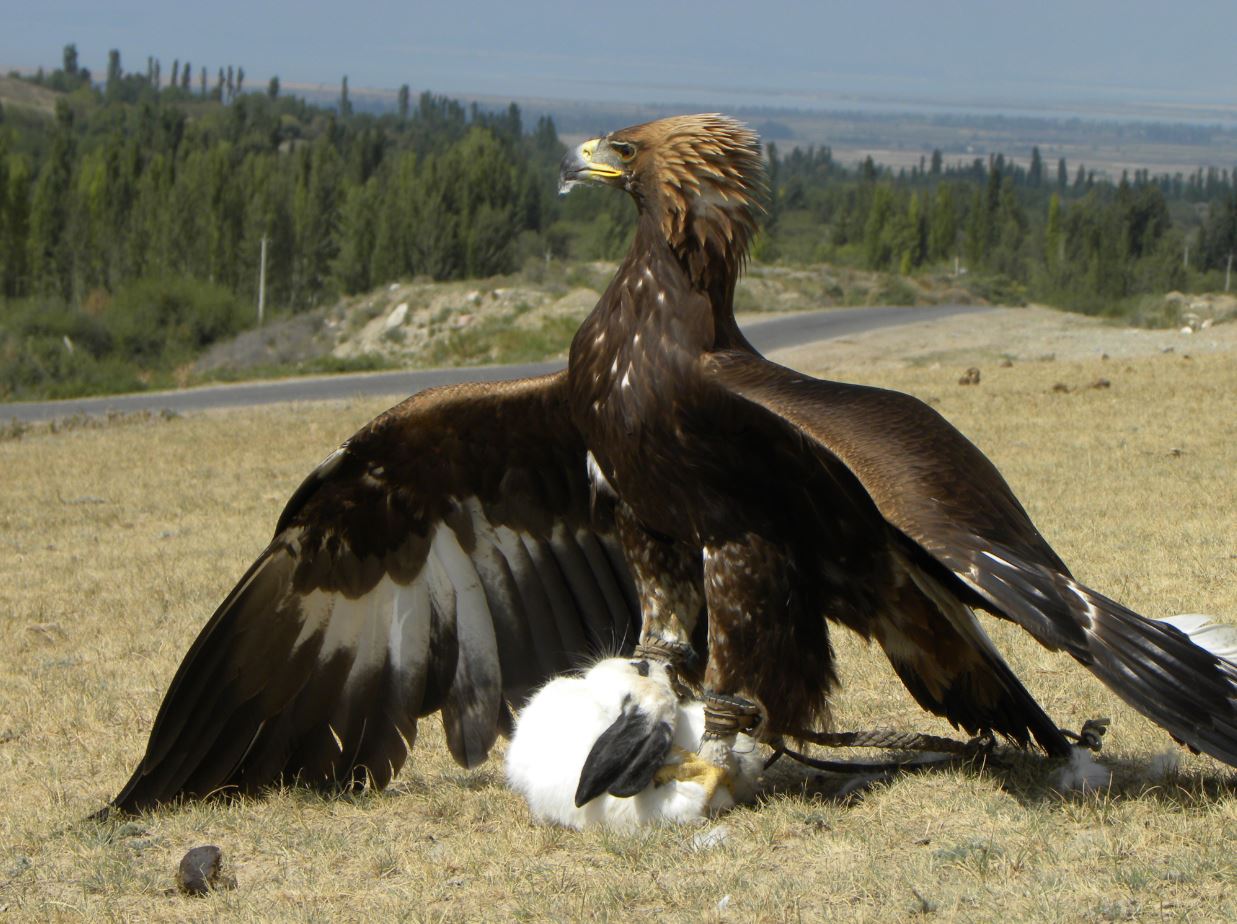 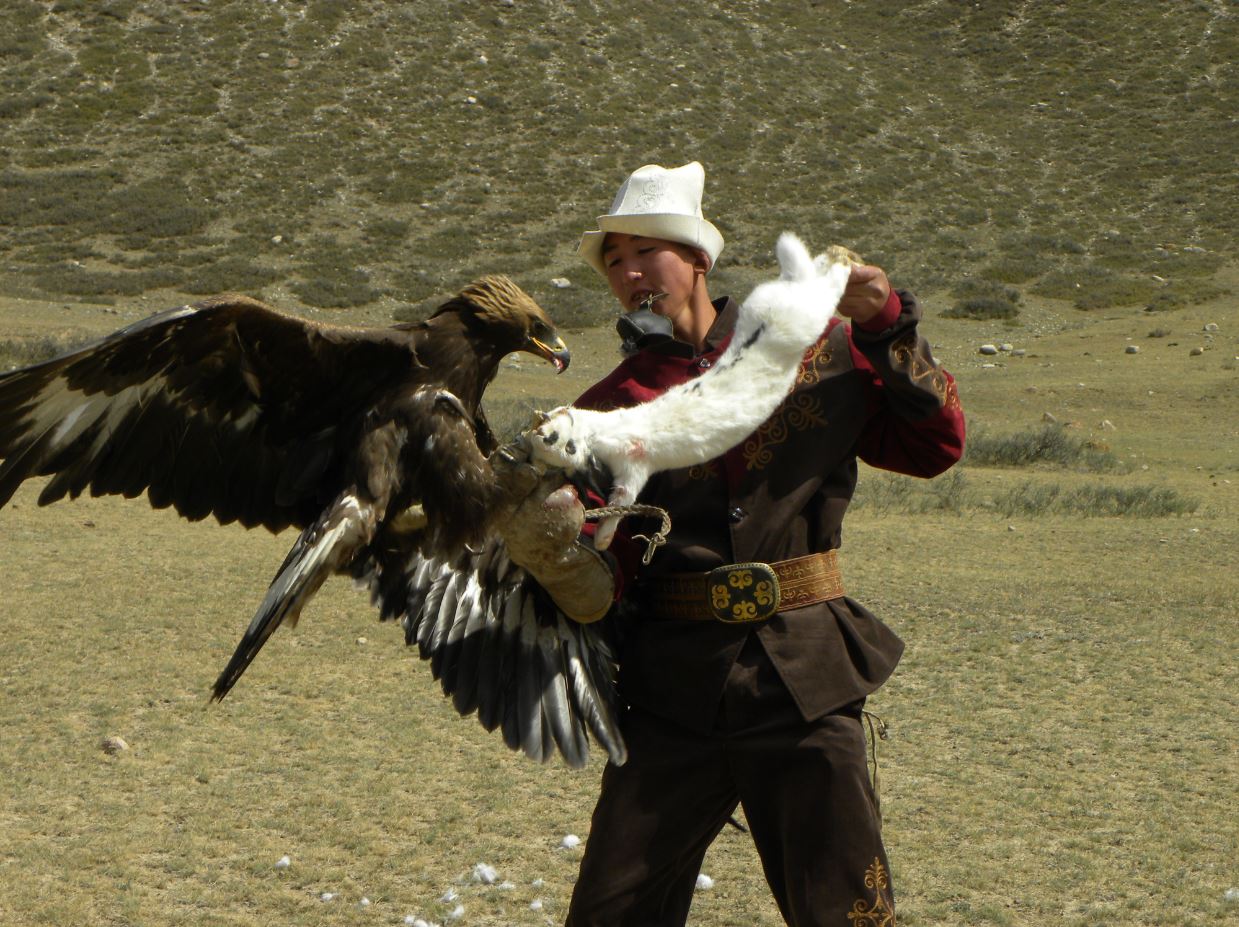 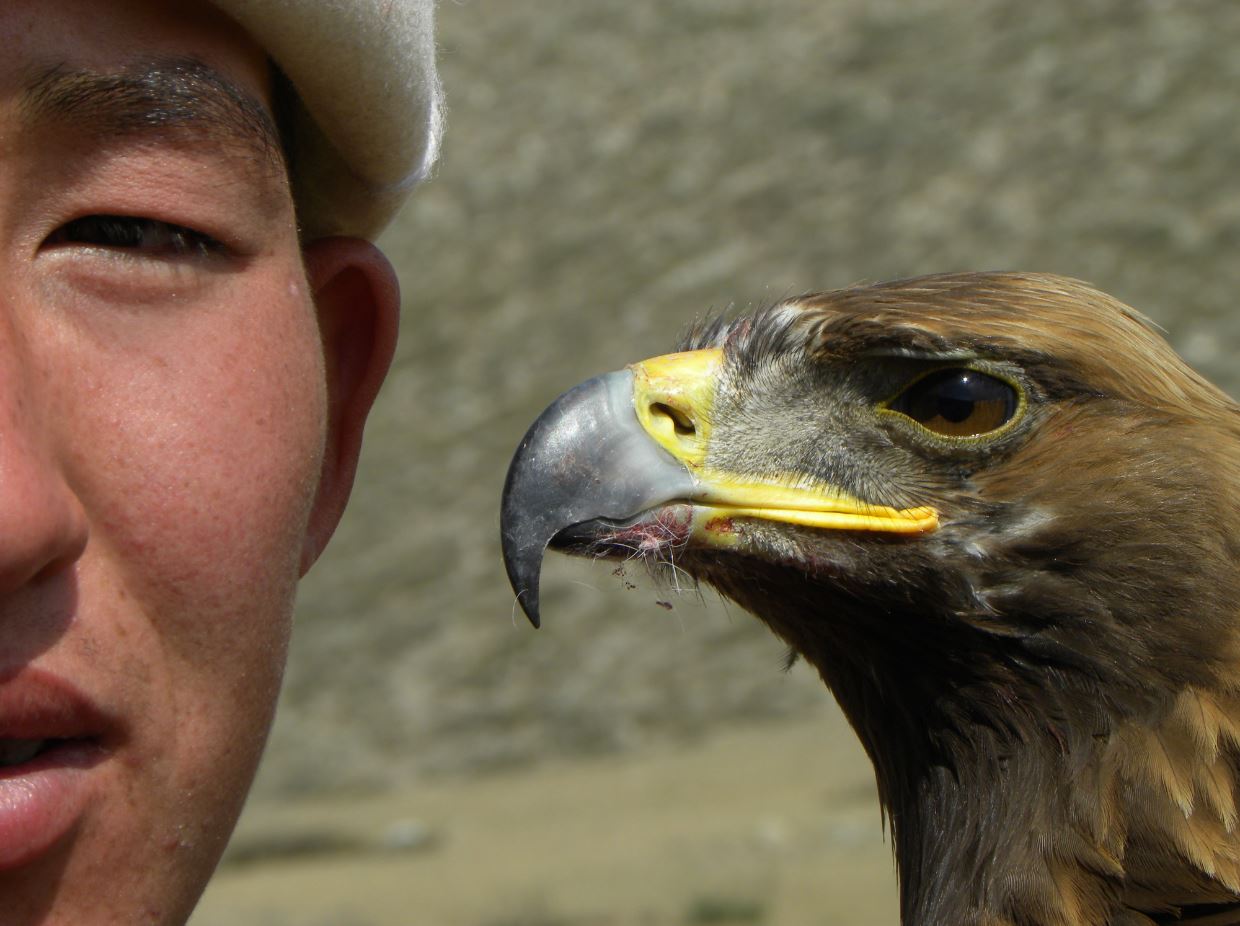 Lunch picnic at the shore of the lake.
Visiting Jety-Ogyz Gorge

Jeti-Oguz is famous for its large, red sedimentary rocks, about 2,200m. The rock have been carved out by a river from the Terskey Alatoo mountains. Years of weathering have split the rocks into seven parts. The forms of the rocks are similar to the head of the seven bulls, “Jeti”-means seven and “Oguz”-means bull in Kyrgyz. Another beautiful place to see is Broken Heart. This is a reddish rock shaped like a broken heart. For this rock, there are several legends: long ago a king who was very rich and had many wives went hunting. One day he saw a beautiful girl with black long hair. He fall in love with her at first sight, and wanted to marry her. However she was from a poor family and was already engaged. Her family ran away from the king when they learned that he wanted their daughter. But the king caught them, killed her fiancé and her family. Her heart was torn by sadness and the Broken Heart appeared in that place. 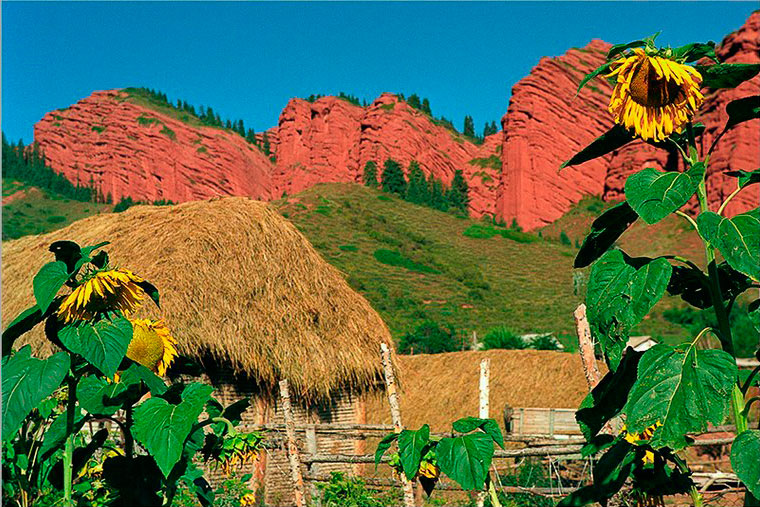 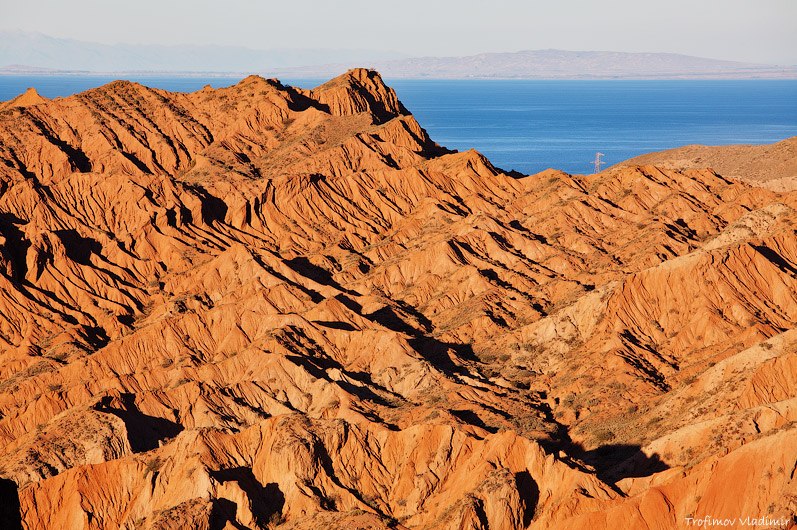 Accommodation at the hotel in Karakol Town. Dinner.

After breakfast transfer to Altyn-Arashan Gorge.

Altyn Arashan (Golden Spa) is a valley and mountain resort near Karakol and Issyk Kul Lake, northeastern Kyrgyzstan. It lies along a trekking route from Teploklyuchenka (Ak-Suu). It is a hot spring development set in an alpine valley, containing the 4260 metre Pik Palatka in its southern part. It is said to "include three groups of nitric thermals springs on the right side of the Arashan River, 20 km southeast of Karakol mountain, situated in a picturesque forest landscape at an altitude of 2350-2435 metres." The resort has numerous wooden sheds which contain hot sulfurous pools to cure various ailments. The resort is set in a botanical research area called the Arashan State Nature Reserve which has about 20 snow leopards and a several bears. 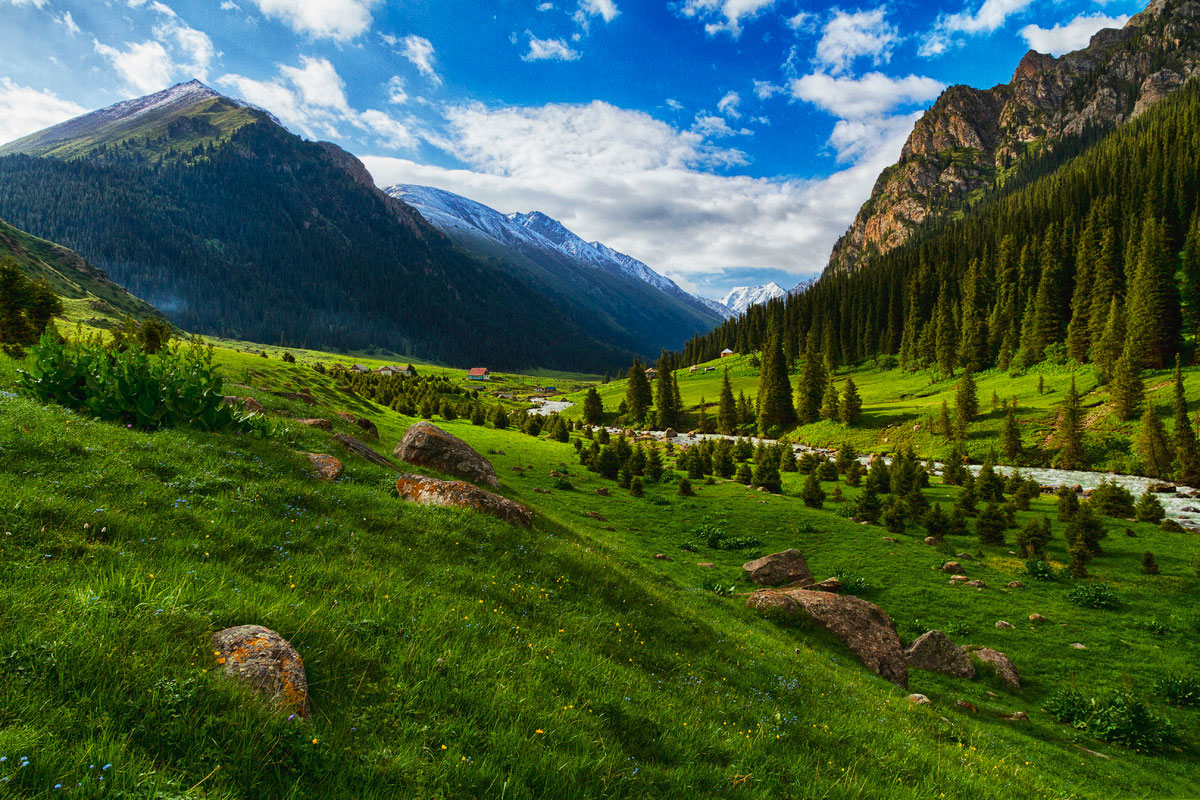 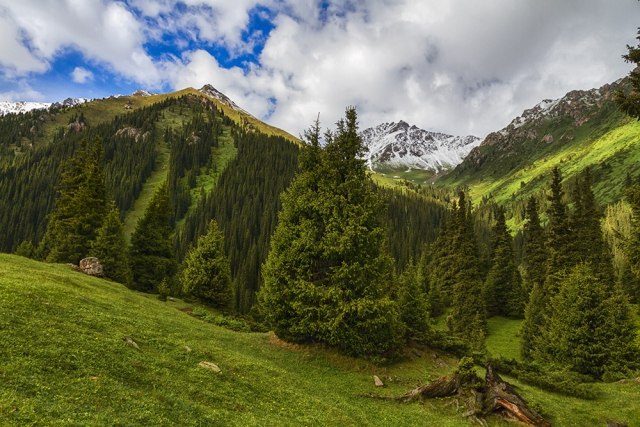 Walking in the gorge, taking bath in the hot spring water. Picnic lunch.
In the afternoon transfer to Karakol Town.
Dinner with Kyrgyz Folk show in dungan family.
Accommodation at the hotel. 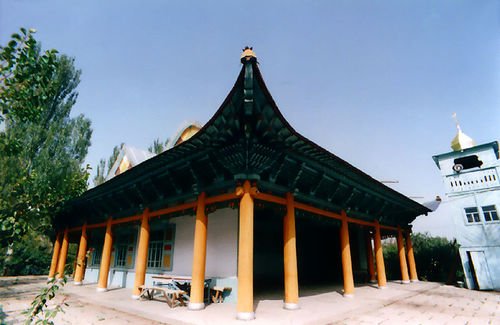 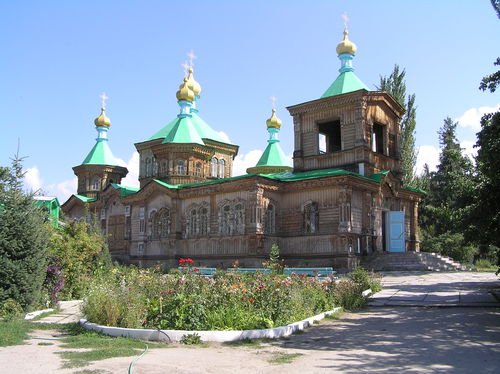 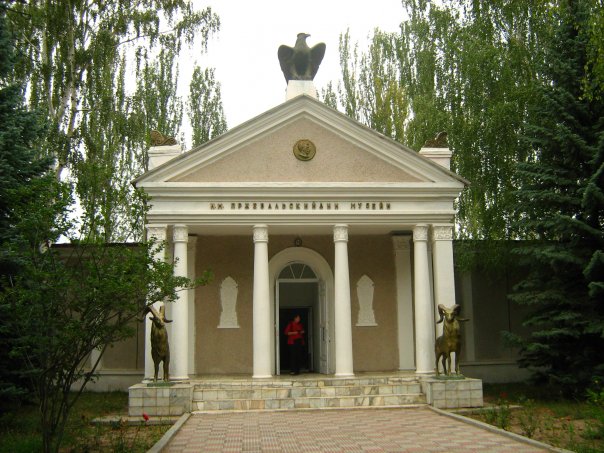 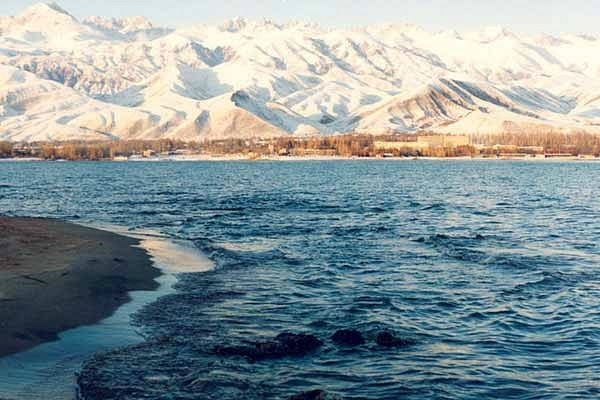 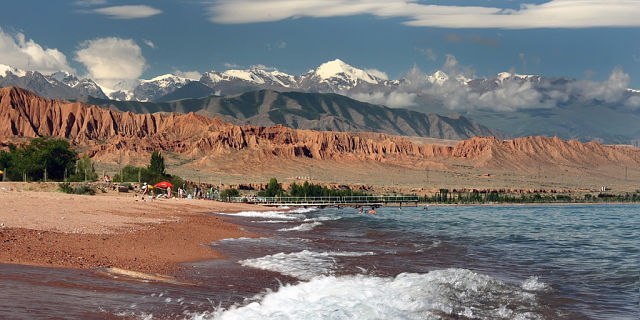 Transfer to Bishkek. Visiting an open gallery of petroglyphs in Cholpon-Ata Town.
En the route excursion to the 11th century Burana historical complex. 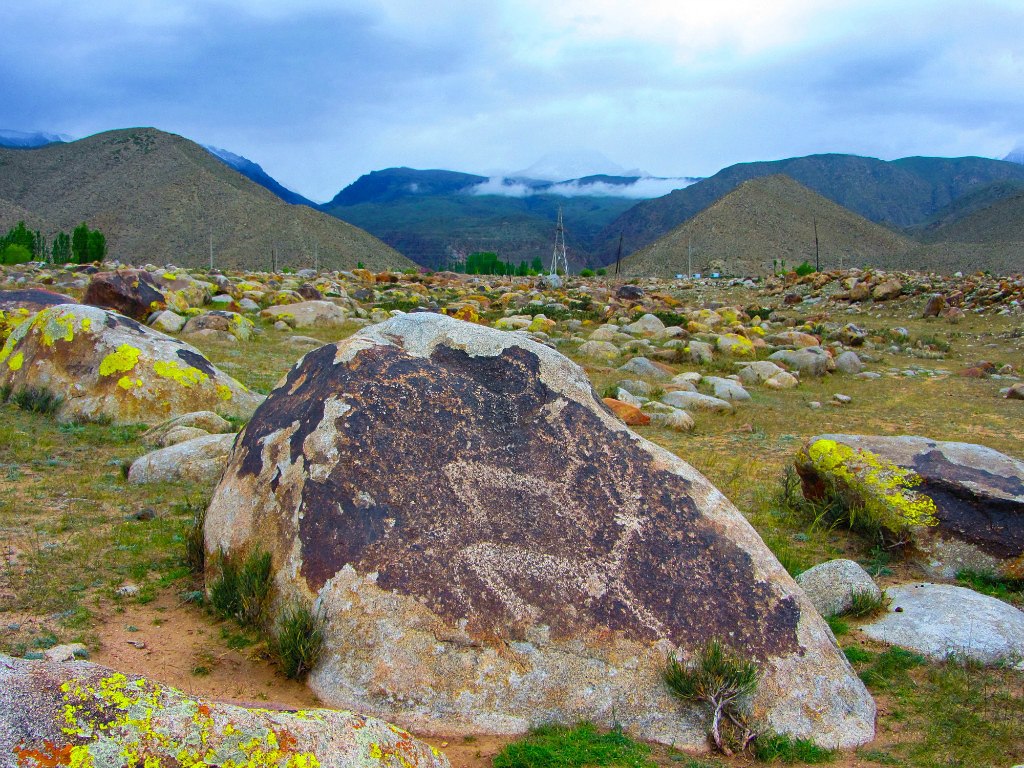 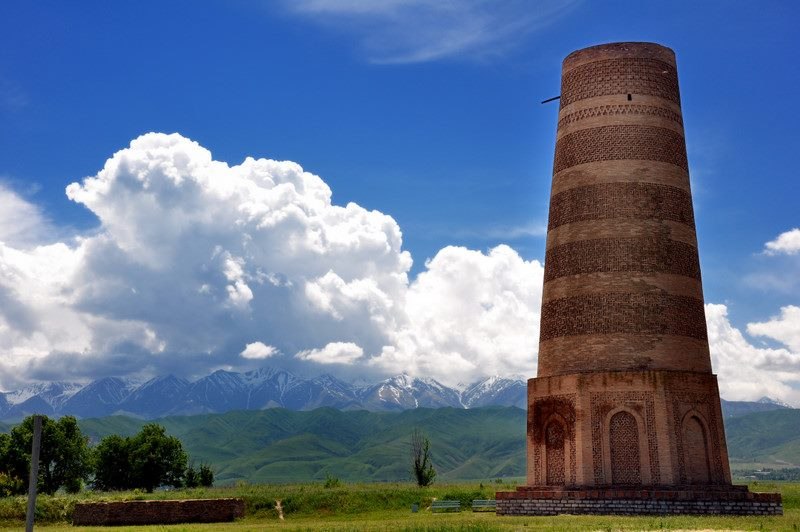 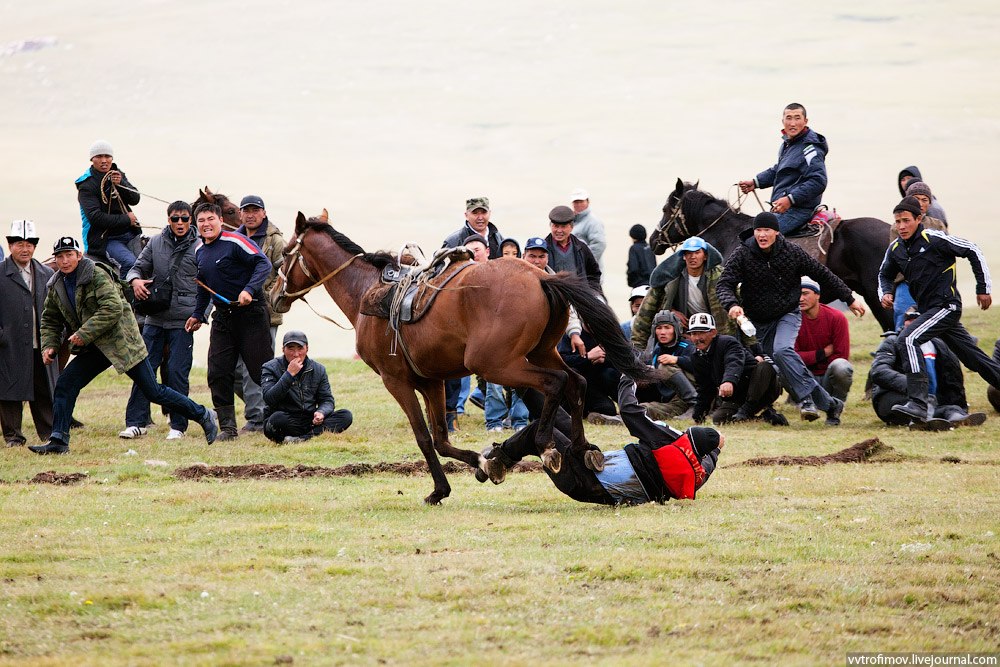 Demonstration of horse game show.
Lunch.
Accommodation at the hotel in Bishkek. Dinner.

Transfer to the airport. Departure.